How high is the Hungarian tax wedge?

What tax burdens does the Hungarian tax system impose on taxable persons? How worrisome are these burdens? How complicated is the system? What result would we get after comparing it with the regional and international systems? What changes and developments has the Hungarian tax system gone through in the past few years? These were the main questions that we tried to find answers to. The result of our close examination is an infographic pack that visualizes the main indicators we analyzed.

One of the most important tax burdens on labor is the personal income tax. Its rate was reduced to 16% as of 1 January 2011, and then to 15% from 1 January 2016. Thanks to this, the Hungarian personal income tax rate is one of the lowest in the European Union. Decreasing taxes that otherwise influence economic growth and employment negatively has become a tendency: many members of the European Union made the same measures. The latest example was in the Czech Republic where a 15% rate is in force since the beginning of this year. One interesting fact is that Sweden has 61.85% personal income tax rate which is considered to be the highest rate globally. You can find the tax rates of the neighboring countries in the chart below. 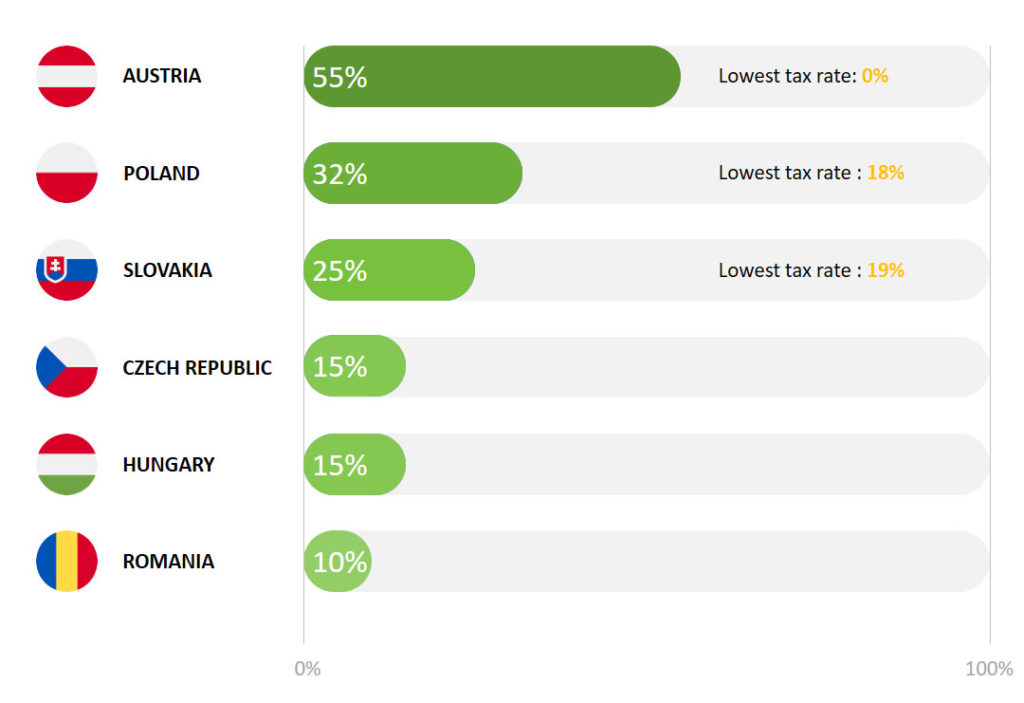 The general restructuring of the Hungarian tax system was completed in 2013. The economic growth planted by the tax reform and the increased flexibility of the state budget made the implementation of a number of new tax measures possible, so to enhance the competitiveness of Hungary. The introduction of a single digit 9% corporate income tax rate, which is the lowest rate in the European Union, was one of the most important elements of these measures. Interestingly, the world’s highest, 55% corporate income tax rate is in the United Arab Emirates; however, it is typically imposed only on foreign banks and oil corporations. 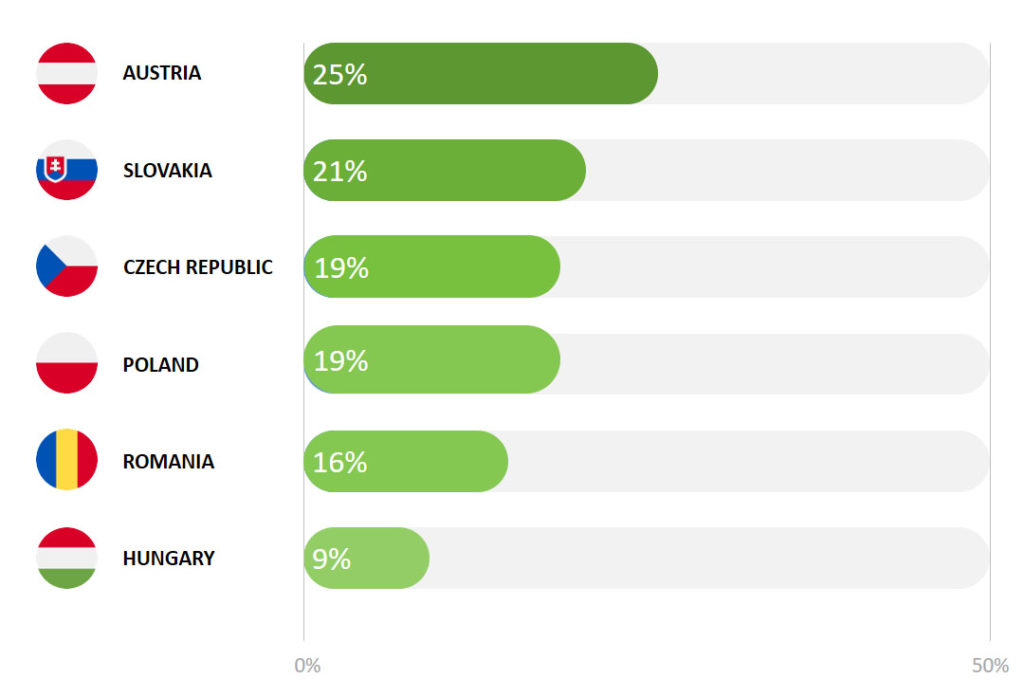 According to professional studies, imposing tax on consumption has the smallest negative effect on economic growth. The most important type of consumption taxes is the value added tax. Hungary is taking the lead in Europe with its 27% VAT rate. Needless to say, the increase from VAT income made it possible for Hungary to reduce the rate of income taxes, the corporate income tax in particular. While Hungary is leading the way in Europe, Bhutan is considered to have the world’s highest VAT rate at 55%. 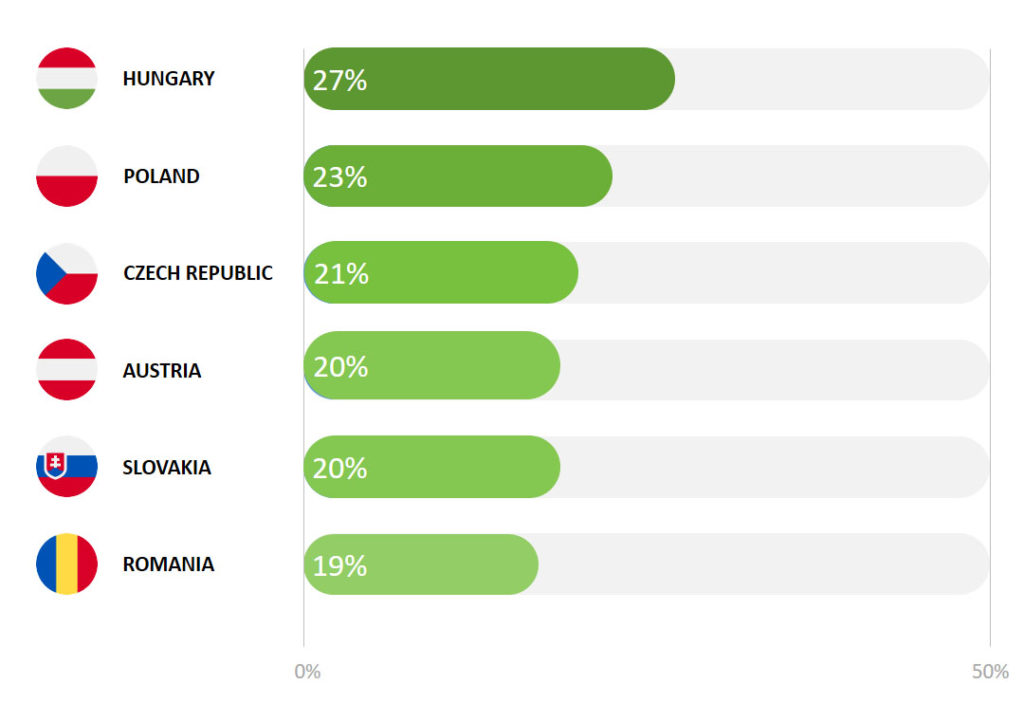 One of the most notable indicators that describe the tax system of a given country is the so-called tax centralization ratio. This ratio shows how much income the state realizes from taxes and contributions compared to GDP. According to Eurostat, in 2017, the greatest decrease in respect was in Hungary in the European Union (although it is still relatively high). In the meantime, the European average has risen. 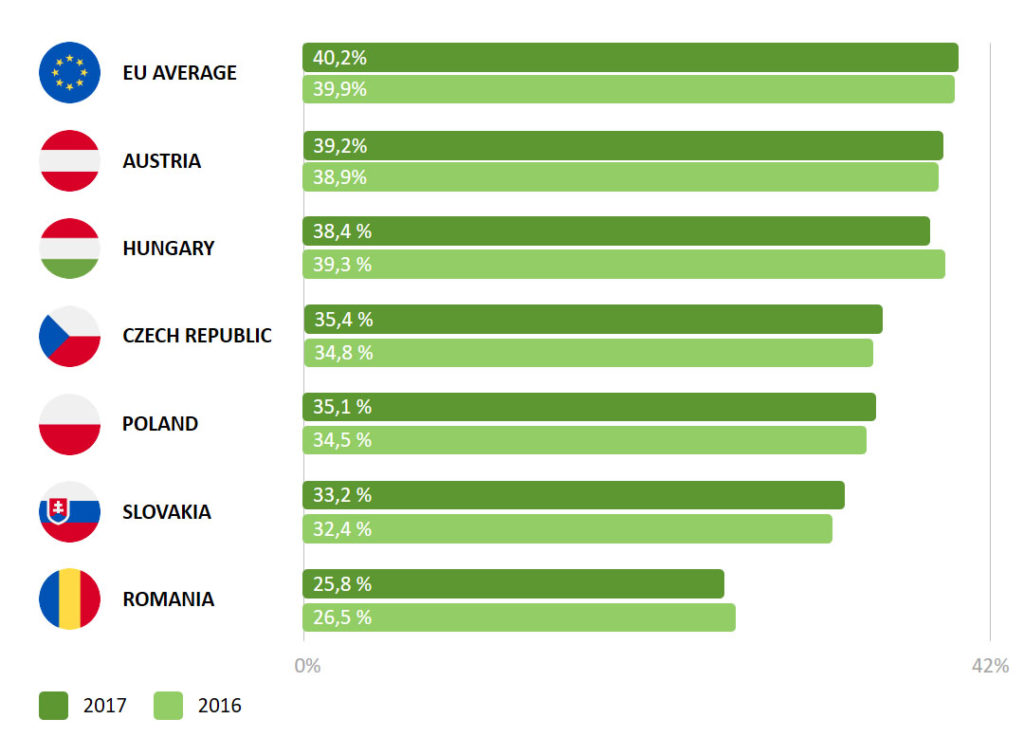 TAX AND CONTRIBUTION INCOME PER CAPITA

This informative indicator makes international comparisons easy to understand, it shows the tax and contribution income per capita of a country under examination. 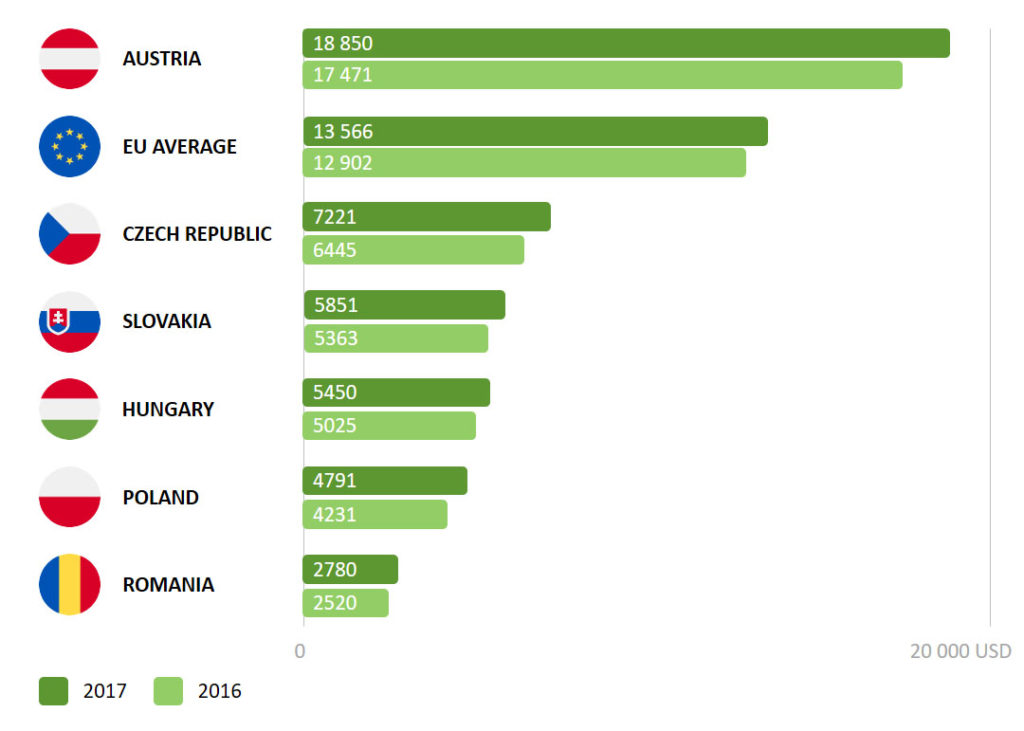 It is worth examining more indicators, such as the overall (total) tax burden on companies. This ratio shows how much tax and contribution liability a company has after taking into consideration all exemptions and deductions. It can be seen that from 2017 to 2018 Hungary has made a huge step forward and reached the average of the European Union. 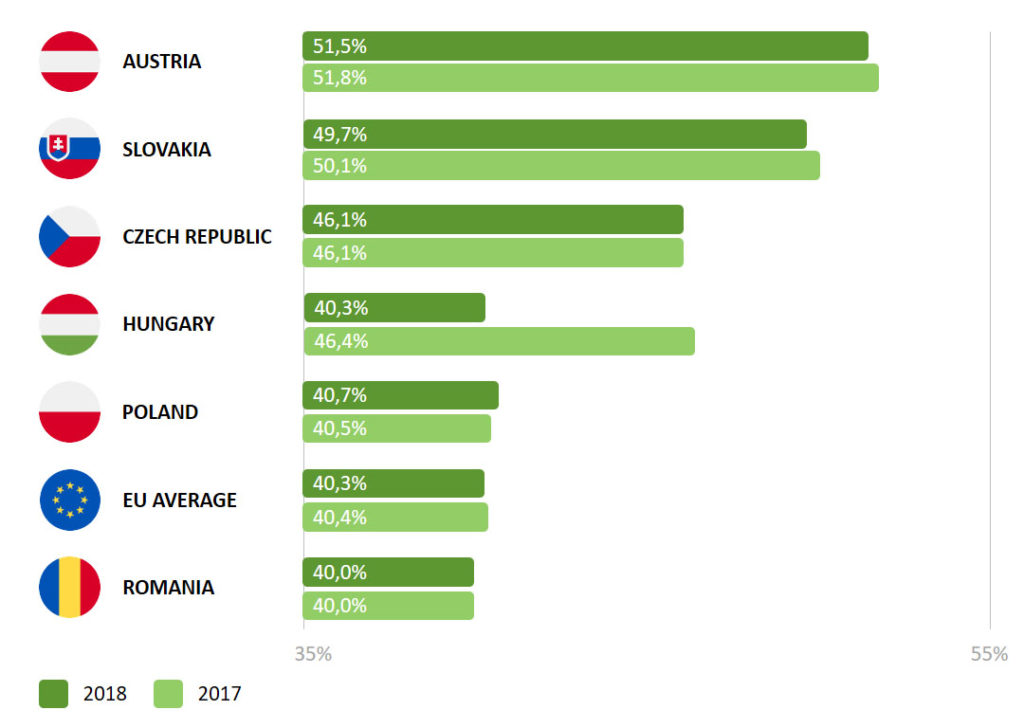 When it comes to determining the level of taxation on companies and the administrative burden, it is worthwhile examining the time spent on calculating taxes, collection of relevant information and the payment of liabilities. In Hungary, for an average size of Hungarian company this takes 277 hours. 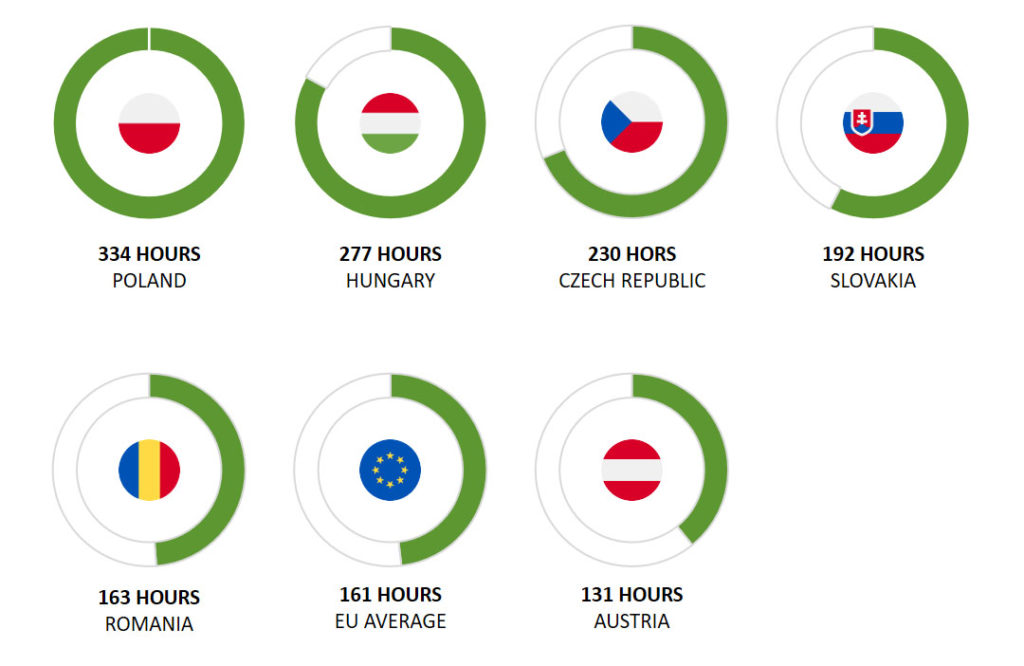 Besides this, the complexity of a given country’s tax system can also be measured by examining the number of types of tax and contribution liabilities. 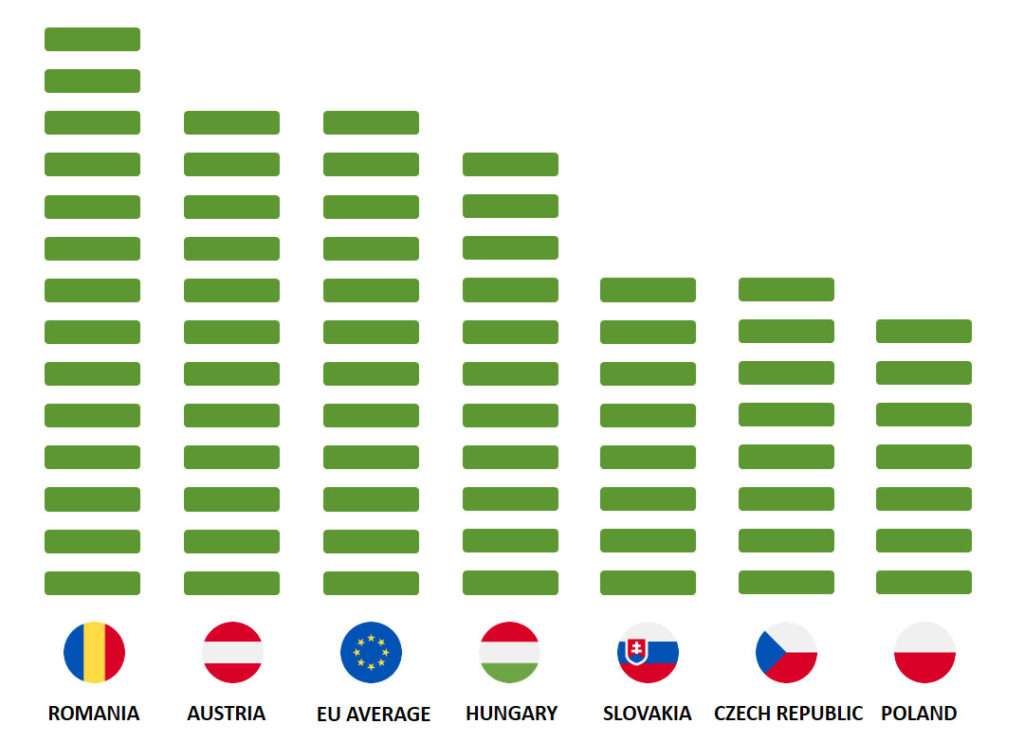 It is a crucial issue for both employers and employees how much the tax burden on labor is. It can be measured with the so-called tax wedge indicator that shows how much tax and contribution is payable on 100 units of income. The figure below illustrates the average rate of tax wedge of single employees without children earning average income, in the past 4 years. 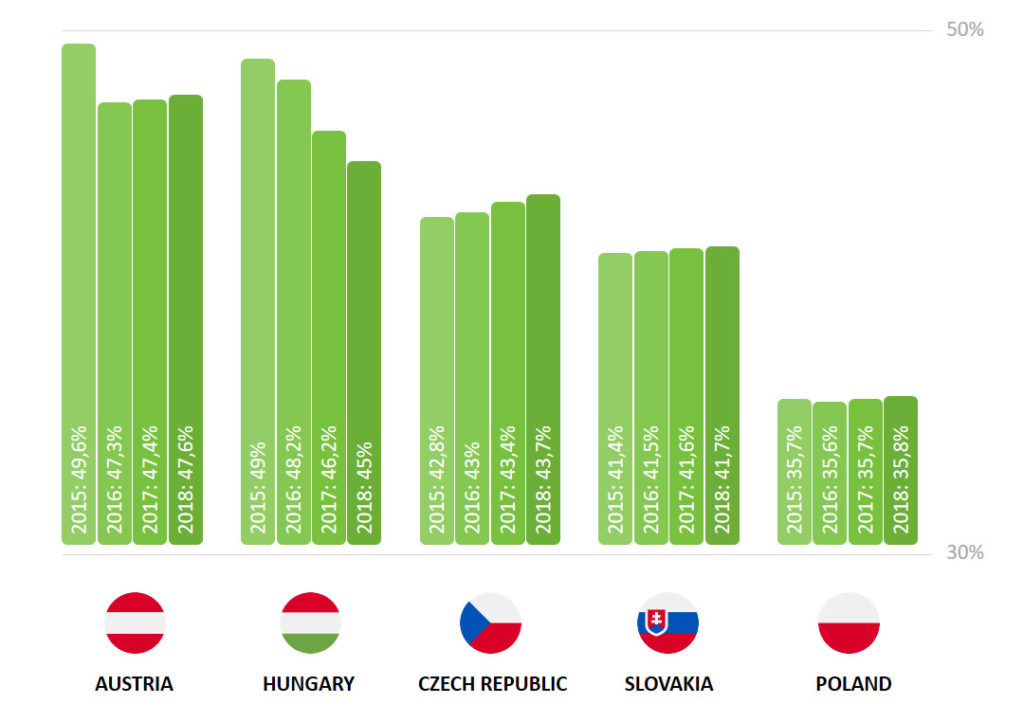 The tax wedge is significantly lower for couples raising more than one child. The below chart depicts couples’ tax wedge having two children.

As a rather irregular indicator describing a tax system (source: Institut Économique Molinari) is the so-called tax freedom day, which is a way to visualize taxable persons’ tax burden. The tax freedom day is the date from which employees start earning money for themselves instead of paying tax to the state. The sooner this day comes, the lower the tax burden is in a given country. When calculating the indicator, besides the tax burdens on the gross wages, consumption taxes, for example the value added tax, are also taken into account. 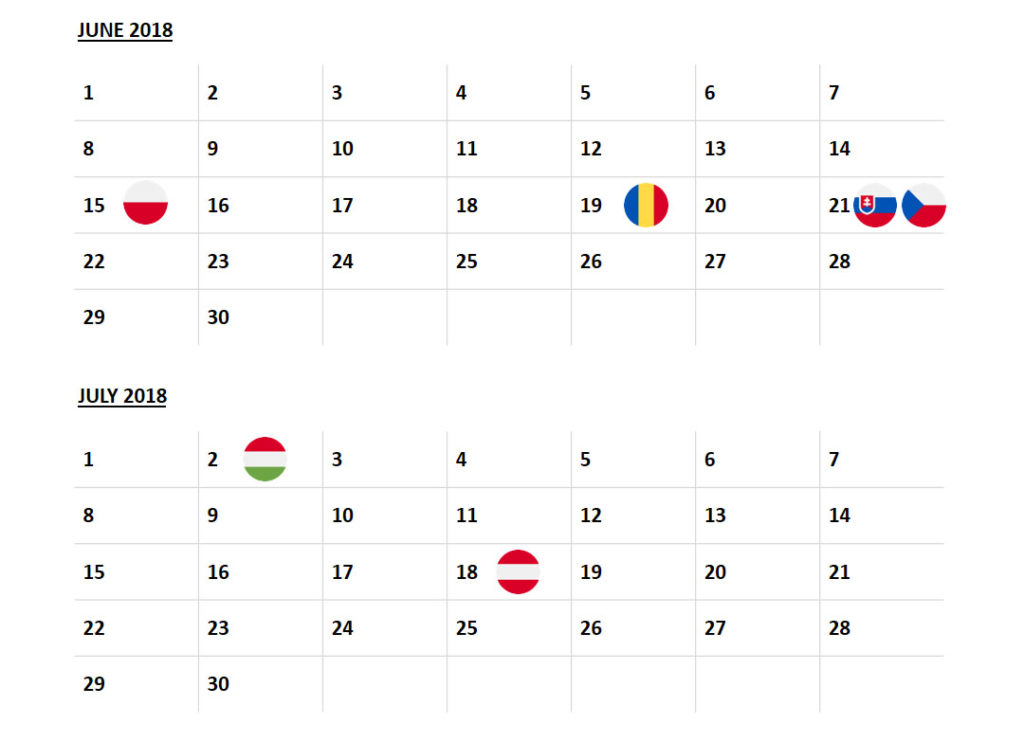